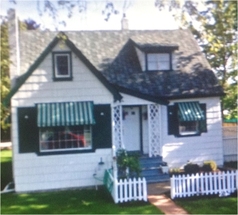 In 1968 renovations were conducted which included expanding the house to fill the recessed corner on the north-east of the building. This created a uniquely eclectic roofline with the eastern end resembling a “New England Saltbox”, while retaining a conventional high peaked gable at the western end.

When the Abbott Street Heritage Conservation Area was established in 1998 it was appropriate that this property was within it, since it has a dual value from a heritage viewpoint and is prominently located at the corner of Lake Avenue and Maple Street.

However, by 2012, when it was sold by the second of the only two families to have ever lived in it, it was showing its age and needed serious work.

Additionally, when it was built an error had been made such that it encroached onto the neighbouring lot, thus making that lot unavailable for building and drastically reducing its value.

The obvious solution was to demolish the house and build two “McMansions” on those two lots and in many cities that would be the only way to utilize the development potential of the lots. 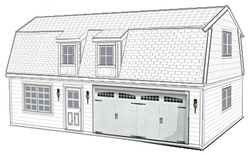 However, neither the new owner, nor the city, nor the neighbourhood wished to lose such a unique building.

Fortunately, Kelowna permits the use of under-utilized density by the construction of carriage houses and this made it economically viable to restore the old house.

Because of the historic encroachment, a lot of work was needed by the owner, city council and staff as well as the Heritage Conservation Committee to make this possible. Multiple re-zonings were needed along with boundary changes.

The carriage house is now available for rent (click for details) by discerning people with an interest in living in this prime area, close to beaches, downtown Kelowna and the Kelowna General Hospital.

The owner of the properties has also proceeded with development of the adjacent lot, which had been forced to remain vacant because of the former encroachment. This lot was developed in a manner which complemented and co-ordinated with the old house and the carriage house. Again, this plan involved much work by the city and the Heritage community as well as the owners and designers, Lemon Garden Design and Shane Baxter Design.

It was also possible to preserve the magnificent London Plane tree, a variety which can provide centuries of visual enjoyment.

Although for legal reasons the properties must remain separate, the overall effect when completed will be that of a single colonial estate property, with a main house and two subsidiary buildings.

The City of Kelowna has recognized this sensitive infill development in a heritage conservation area by featuring it in the city's "Infill Challenge Best Practices Guide".